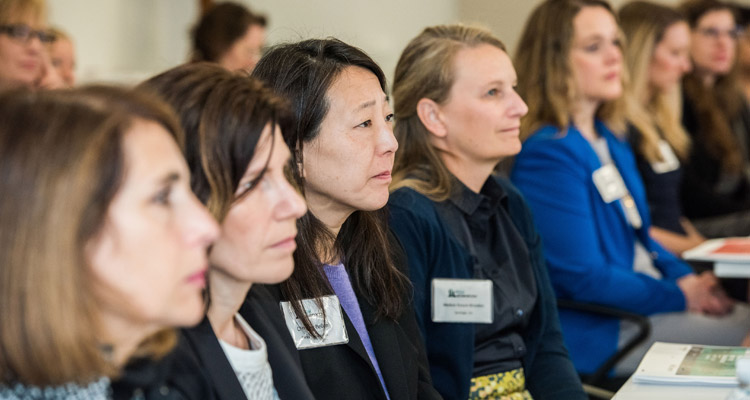 They came from far and near, all with similar purpose and ambition.

These women were a force to be reckoned with, including highly skilled strategic thinkers in the life science and healthcare sectors, from R&D to commercialization, operations, and regulatory affairs/compliance for both small and large cap companies.

Yet despite the high aptitude of this representative sample of female leaders, the stark reality is boards are only made up of 20% women.

The venue was the fourth annual meeting of Breaking into the Boardroom™ (BiB) held this past April. Deerfield, a co-founder, aims to change these statistics.

Speaker Jan Berger, MD, boiled the problem down to this when she addressed the crowd: “It used to be that the only diversity in the Boardroom was whether the male only members were sporting black, blue or grey socks.” Berger is president and chief executive officer of Health Intelligence Partners, a healthcare consultancy she founded.

The goal of BiB is to promote greater representation of female healthcare executives on boards within the public, private and non-profit sectors. Covering such topics as how to get a board seat, the role of governance, spectrum of board opportunities and legal and regulatory duties—the event lured 45 women from across the country, representing a broad cross section of experience from throughout the healthcare ecosystem.

Studies suggest that female-led companies are better run and bring greater returns[1], which begs the question why then are women still commercializing less and acquiring less venture capital when they do. On the upside, event speakers noted that men with daughters who have skin in the game tend to come around, suggesting their potential adaptability for change.

Among the reasons to account for the low number of female board members are a shrinking pool of candidates by the time the c-suite is reached with an upside down male to female ratio. In addition, stereotypes, unawareness, and unconscious bias amplify the problem, creating more barriers, said the presenters.

“We’re at the intersection of two industries—healthcare and finance—with bad statistics and must do better.”

This issue may, in part, be reflected by other instructive statistics about women in the workplace, in general. According to Vicki Gaddy, Head of HR Strategy and Talent Acquisition at Deerfield, women tend to apply to jobs when they possess 100 percent of the skills required; men throw their hats in the ring when they have only 60 percent.

“The one lesson I learned too late was to advocate for myself.”

Conference attendee, Mariana Nacht, PhD, chief scientific officer of Vivid Biosciences and president of the board of WEST, Women in the Enterprise of Science and Technology, a non-profit focused on supporting women in STEM.

Approximately 60 percent of those surveyed who attended the event reported that they have been searching for a board seat between six months to one year. All respondents indicated an interest in being connected with a mentor who could advise them on best practices for securing a board seat, a majority of which also expressed wanting advice on how to negotiate salary.

And among the greatest challenges cited to securing a board seat were finding opportunities and a lack of experience, contacts, as well as the time needed to put into it.

As for feedback to an open-ended question in the survey, there was an interesting range of responses to this scenario:

Q: When a male board member exits the board meeting early to catch his son’s little league game, it’s respected. Historically, women haven’t received the same response. What could we do now to help inspire change and alter perceptions over the longterm?

The more we normalize that both men and women have responsibilities outside the workplace, the less women would have to deal with this stigma.

My initial reaction to this scenario above was: Really? There are a handful of board meetings a year and someone (man or woman) is deciding to leave early for a ball game?

All of the event’s speakers stressed the importance of networking and letting everyone know your interest: No one is going to come knocking at your door for doing a good job, advised the group.

Companies are looking for board members who can demonstrate value to their investors. It’s important to let people know you are looking for a board seat and to show a willingness to share your knowledge and experience by networking or participating on industry panels.

Deerfield Partner Adam Grossman, who participated in a BiB panel discussion on how to get a board seat.

Grossman added that anyone seeking a board seat should choose wisely. “Executives may be tempted to jump at any board seat. Your time is limited, make the most of what you have to give.”

Know your gifts and see how you might pair them up with an organization’s mission. Look outside of healthcare and think about how you could take your talents and apply them in a different industry where you could make a difference.

Speaker Claire Pomeroy, MD, president of the Albert & Mary Lasker Foundation, cautioned this should not be about getting a board seat, but focused on getting the right board seat.

“I’m not a rubberstamp kind of gal,” said Berger. “Ask yourself these questions: Am I going to learn something new? Can I make a difference? How do they handle conflicts and balance responsibility? Will I be compensated fairly? Look at the financials. Talk to the CFO. Look at Glassdoor.”

All in all, the speakers recommended doing one’s due diligence and sitting in as an observer before signing. One speaker decided not to commit after witnessing a fist fight at her sample board meeting.

“Anyone who’s going to join a board and think it’s easy, you need to be prepared for whatever comes your way,” said Berger who once had to skype at 3am from an African safari.

Pomeroy and other speakers suggest trying one’s hand at a non-profit board first. These are generally considered more flexible and less demanding compared to corporations that have year-round schedules. Though one speaker warned that one may be expected to contribute from his or her own pocket and to take a financial risk.

“Executive search firms will deliver the most diverse board candidates,” offered Pomeroy. Despite this view, representatives from Oxeon Partners, a healthcare executive search firm and co-founder of BiB, reported that men return calls much more frequently than women, who rarely do.

As for the best approach of newcomers to any board, Berger said, “Gently lean in, but listen closely and don’t speak until you get the rules of the road. Likewise, be thoughtful how you exit a board.”

Duffy emphasized the importance of women supporting other women, which she said is often not the case.

Pay it forward and backward. Replace female board members with females and recommend females for board seats. Break into other networks that are often male dominated, and do so under your terms.

Duffy continued, “not all networking has to happen fly fishing or on a golf course! Many male executives tell me they don’t know where to find top female talent – let’s be proactive and get out there and advocate and nominate each other. Let’s make a charter from this meeting: How Do We Mentor and Support the Next Generation, So That They Don’t Go Through What We Did.”

Breaking into the Boardroom is only one of several programs that Deerfield runs through which it is looking to make an impact. In addition to BiB, Deerfield also sponsors the Deerfield Fellows programs and plans to sponsor the Women in Science program.

To date, the Fellows program, for which only students who attend the gender and ethnically diverse CUNY system are eligible to apply, has engendered 9 fulltime associates at Deerfield.

CUNY students and alumni currently make up nearly 10 percent of Deerfield’s staff, including Fellows . “We pay them to learn about healthcare finance. This program increases the number of applicants and the best way said Flynn. “We could fight over a pool of scarce resources with all the other firms striving for diversity, or we could be proactive and increase the pool itself.”

The Women in Science program, slated to make its debut with an inaugural session this winter, will focus on female scientists and best practices toward commercializing their scientific discoveries.

“Bringing gender and ethnic diversity to the room will bring with it cognitive diversity. This will get you to the best results and answer,” says Leslie Henshaw, Deerfield Partner and BiB co-director.

“Providing voice to a diverse set of stakeholders introduces new ideas. And, in the case of healthcare, it could spark more inclusive and creative solutions to the intricate and complex set of issues associated with the industry’s intractable set of challenges.”

Nacht says that she enjoyed this year’s BiB event but yearns for a time when it will no longer be needed.

During these extraordinary times, we’d like to take a moment to salute the devoted, selfless individuals who are on the frontlines of the COVID-19 pandemic. You are our heroes, and we thank you for your hard work and dedication.

At Deerfield, we remain committed to our Foundation partners, especially those hit hardest by the crisis. We have pledged approximately 10 percent of our Foundation’s annual budget toward emergency funding to organizations in need of urgent resources in order to provide care to their communities.

Importantly, we also want to commend our partners across the healthcare industry who are working tirelessly to care for patients, find a cure or a vaccine, ramp up testing, and accelerate production of essential ventilators, masks and other critical supplies to keep our nation’s healthcare workers safe as they put their own lives on the line.

Our hearts go out to everyone who has been affected by this crisis. The times ahead will be tough, but together, we will get through this and come out stronger than ever.